Large Majorities across Parties Say Medi-Cal is Important to the State;
Most Residents Say Program is Important to Their Families;
Access to Care Remains a Challenge for Some Enrollees

Among health issues, Californians’ top priorities are ensuring people with mental health problems can get treatment (49% say it is “extremely important”), making sure all Californians have access to health coverage (45%), and reducing what people pay for their health care (41%).

Mental health access ranks in the top two health priorities for Democrats, Republicans and independents alike. Half (52%) of all Californians say their community does not have enough mental health providers to serve local needs. 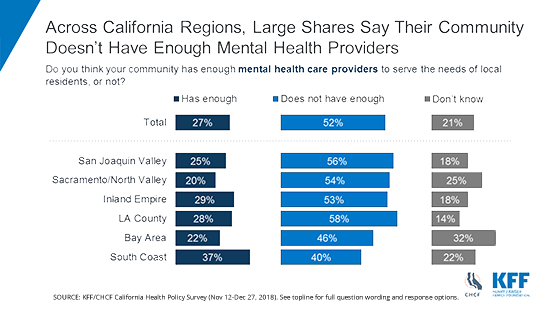 “We have never before seen the public place such strong emphasis on access to mental health treatment in our national or state polls,” said KFF’s President and CEO Drew Altman.

“There is a strong sense of urgency in these mental health findings,” said Sandra R. Hernández, president and CEO of the California Health Care Foundation. “Californians are telling us loud and clear that more should be done to expand and improve mental health treatment.”

The state-wide survey of 1,404 California residents was conducted before new Gov. Gavin Newsom unveiled his budget plan and priorities, which include proposals to expand health care access, affordability and coverage. Its findings highlight many of the challenges Californians face in these areas as the governor, legislature and other policymakers weigh potential solutions. For example:

Views on the Affordable Care Act and Covered California

Most Californians (58%) view the Affordable Care Act favorably, making the national health reform law somewhat more popular in California than the country as a whole. This may be largely due to the fact that California leans Democrat, and Democrats are more supportive of the law than independents or Republicans.

Most Californians (56%) also say the state-run health insurance marketplace, Covered California, is working well. This includes majorities of Democrats (70%) and independents (55%), but only a third of Republicans (34%).

Designed and analyzed by researchers at KFF and the California Health Care Foundation, the California Health Policy Survey was conducted from November 12-December 27, 2018 among a random digit dial telephone sample of 1,404 adults living in California. Interviews were conducted in English and Spanish by landline (476) and cell phone (928). The margin of sampling error including the design effect for the full sample is plus or minus 3 percentage points. For results based on subgroups, the margin of sampling error may be higher.

Filling the need for trusted information on national health issues, the Kaiser Family Foundation is a nonprofit organization based in San Francisco, California.